As I sit here and reflect on the year gone by, I think of all the things I've accomplished and all the things I haven't. As everyone, I started 2011 with a game plan. I finished a novel, Kiss of the Gypsy; I was going to edit it and I was going to start the hunt for a publishing agent with the view that by this time I would be a step closer to published success.

I edited, I hunted, but then realised that it was still missing something and so it's been put on the back burner to ferment and develop that spark it needs. I never forgot about it, in fact I can see it beginning to smoulder - but it's just not quite ready to be continued yet.

In the meantime, as I sat, watched and hoped for that kindle to light itself, I started another, Lady of the Seas, the fourth in my Fantasy series. It was developing rather well and I was feeling really pleased, but after 36,000 words I put it on hold to write another. On November 23rd Son of Jack was published on Amazon for Kindle, leaving me free to continue with my original, Lady of the Seas.

And so I reflect:

Have I reached the goals and successes I set at the turn of 2010/2011? No. But I have reached other successes. I'm published - albeit not the way I wanted, but I have, to this date, made a grand total of TWO sales; I have yet another finished novel under my belt to add to my list; I've given a talk on the craft of writing to a class of ten year olds with the possibility of being asked to go back sometime in the New Year, AND, with all the writing hours accumulated throughout the year, I've developed more confidence in what I do and what I produce. I think in our line of work, this last is the most important. You can't find success if you don't have confidence in what you do.

So, I may not have reached my original goals, but I've accomplished new ones I never foresaw this time last year, and I leave behind 2011 with a feeling of pride - as we all should. I've read too many blogs to remember this year, but I do know that everyone of you have dedicated many - MANY - hours to your writing. Some have even seen the successes I dream of. And so to all of you - those who reached their goals and those who have not - well done. Don't ever let the feeling of failure engulf you. In this business, it's all experience; we learn from experiences and the more we learn and embrace, the closer we are to those goals we dream of.

May 2012 bring many more hours of wonderful writing.

Speaking of that feeling of Pride, I've chosen a piece from Marta Dahlig's Seven Deadly Sins collection (Pride) for the last Pic of the Week for 2011.

Have a wonderful turn of the year, people. It's been a good one, so let's have another!!! 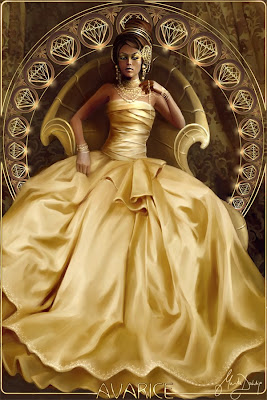