ON THIS DAY: Friday the 13th - Unlucky for some.

It's not exactly known where the superstition surrounding the unlucky Friday 13th originated from. Some believe it is just because 13 is an unlucky number, and that the 6th day of the week is an unlucky day. Put them both together and you have double trouble.

However, another theory has it connected to Friday October 13th 1307 and the era of the Knights Templar. I'm sure you're all aware of who the Knights Templar are, so I won't go into detail about them. However, it was on Friday October 13th 1307 that King Philip IV of France ordered the arrest of the Templar's Grand Master, Jacques de Molay, and many other Knights. The King was deeply in debt with the Templars through his wars with England and seized the opportunity as a way out of paying. Many Templars were burned at the stake having been accused of crimes for which they were innocent. This was the grisly beginning of the end of the Templar era.

So, for this weeks Pic of the Week, I thought I'd go with a Knightly theme and found a couple of gems. After toying with two pieces and trying to decide which one to use for today, I discovered that both were by the same artist . . . so I'm going to use them both.

Introducing artist, Mark Malnar. For those interested in Sci-fi and the likes, you have to check out his gallery. He has some stunning futuristic pieces.

Anyway, enjoy, and may the rest of Friday 13th be lucky for you :) 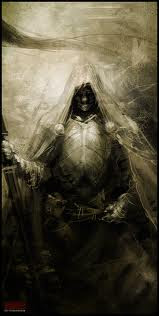 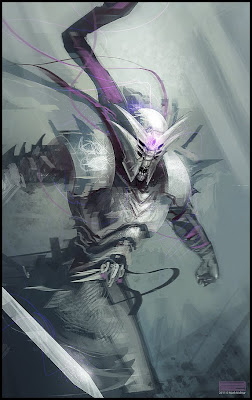