Pic of the Week . . . Victoria Frances

I've tried something I never thought I'd try the other day. I was sitting at my computer, working through the most mundane job and surprised myself by feeling bored of all the music I have at the moment (which is a lot). I fancied something different, something to help take the boredom away.

So, flicking through YouTube (I wasn't skiving off the job, honest) I come across some audio books. I've never listened to an audio book. I've always read a book when not working, and when I am working, I usually listen to music. Anyway, I thought I'd give it go. What harm could it do? I have to sit here all day, and if I don't like it I can always switch to something else.

One of the first audio books YouTube took me to was Twilight. I'm not a huge Twilight fan. The films are okay but I don't ever see me buying the books, despite their popularity. It was then I decided to see what all the hype was about, and so clicked play on the first part.

Within three days I had listened to the entire book. I was stunned at how easily I adapted to listening instead of reading, and how it didn't interfere with my work. In fact it helped me concentrate on the mundane (is that a good thing or a bad thing???). I still haven't changed my mind about Twilight. I still won't be rushing out to buy the book, but at least I can say I've read it - ish (and yes, I'd still like to slap some sense into Bella a few times, but then I need to remind myself that is YA).

I like the vampire genre, but they have to classy for me to rave about them. One author in my eyes who has succeeded is Anne Rice. I love her work and her vampires. I don't know how she done it, but I instantly fell in love with her character Marius. Beats Edward Cullen any day.

So, for this weeks Pic of the Week, I thought I'd go for the vampire theme, and who better to revisit than Victoria Frances. I really love her work - almost as much as Marius, which is why I chose this particular piece.

Enjoy and have a bazinga of a weekend...hee hee... 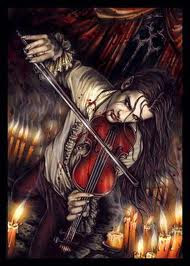