When people talk about works of fantasy, for many their minds are drawn to images from history - the Dark Ages and medieval periods. There are exceptions to the fantasy genre, but the majority of work does fall under this category, and because of this fantasy has been stereotyped. 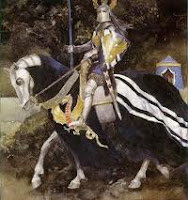 Most settings have a medieval backdrop to it with castles, rolling plains and kingdoms that need defending from dragons and armies of darkness. And who better to protect the kingdom than gallant knights with brilliant steeds, or little elves that believe they're not worthy when in fact they are the 'chosen one'. I'm not saying this is what all fantasy works comprise of. I write fantasy and this is nothing like mine, but it has that classic epic feel to it that has made the genre famous in the past, and a lot of work does tend to lean toward the dark age era.

So why do many fantasy writers like the thought of their tale being set in the Dark Ages? What makes it so appealing? 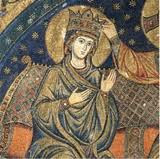 Well, to begin with lets take a brief look at the time when England was in its Dark Age. Unfortunately for those with elaborate imaginations, this wasn't a time when evil roamed, when villages were constantly on guard of the threat of fire-breathing dragons, or when you found tattered maps with markers stating 'there be beasties 'ere'. It was a time when the country was divided into separate kingdoms, was ruled by separate leaders, and when war often broke out over territories. Some years, however, managed to pass with peace across the entire land. Then came the Roman invasion in the first century with the intention of replacing pagan and Celtic beliefs with Christianity and taming us barbarians, followed by the Saxons, the Vikings and the Normans. All this happened within the space a thousand years, shaping the country that we know today - but it left the country unstable and vulnerable.

There are very few historical records from back then, therefore historians know little about it compared to what we know about more recent monarchs such as Henry VIII and Elizabeth I. Because of this, the era has been dubbed 'the dark ages'.

However, the era does hold one story that has gripped the entire world for centuries; that of King Arthur and the Knights of the Round Table. To this day they have found no evidence to prove that he ever existed, and yet no evidence to say that he didn't either. His story about Camelot, Guenevere, Sir Lancelot and, of course, Merlin, the Sword in the Stone, and the Lady of the Lake, is filled to the brim with mystery, magic, bravery and all things fantastical. Maybe he did rule a fine kingdom with his Knights, or maybe this was the very first fantasy story dreamed up. When comparing it to historical facts, Merlin the Sorcerer definitely sounds like a character from a work of fiction. But people love it and have continued to share the tale throughout generations. And, of course, it was set in a time when people didn't inherit the throne, rather they gained it through other means and deeds.

Maybe, with the story of King Arthur so deeply embedded in our minds, the fantasy genre grew and evolved from here; that the dark ages, because so little is known about it, was a haven for all things mystical and unexplained; that there could have been dragons roaming and sorcerers casting evil spells; that anything was possible. And maybe writers subconsciously want to create a fantasy story so big and fantastical that it will be remembered for thousands of years in the future.

You can't deny it, and as stereotypical as it is, the Dark Ages and Fantasy fit so well together...
Posted by DRC at 10:25