Sticking with the Arthurian legend that I spoke about in my last post, I thought I'd go with a piece of artwork based on the Lady of the Lake.

It's unsure what specific role she played in Arthurian legend. Writers and authors have her connected to at least three.

1st role was a woman named Vivian who bewitched Merlin, promising her love after he taught her all his magic, and then sealing him beneath a tree or rock.

2nd is another woman who nurtured the infant Lancelot after the death of his father.

3rd is the Lady who bestowed an enchanted sword to King Arthur - Excalibur.

Other stories have her as a replacement for Merlin; a woman who advised King Arthur and his knights on their quests; as an evil villain or a beautiful heroine. Either way, she's as much part of Arthurian Legend as Arthur is himself.

So this week, we introduce Anita Shue - or Imagothica as she is known on DeviantART. Out of all the pieces I looked at, I liked her depiction the most. The Lady of the Lake here looks neither trustworthy nor innocent. She has that air of mystery that constantly surrounds the legend. Is she the evil seductress who has Merlin trapped, or is she the faithful advisor that helps Arthur on his quests? You decide . . . 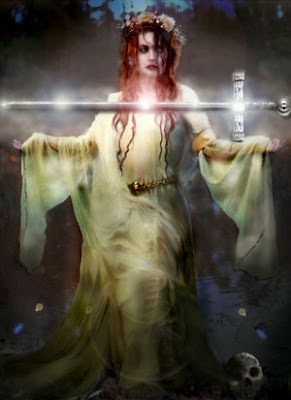