Rewriting Scenes In Your Own Style . . .

Sounds like plagiarism, rewriting scenes in your own style, and maybe it is but it served for a great writing exercise last night at our writers group.


A colleague read a scene from a chosen book, a scene that was only half a page long.  The book - I forget what it was called - was told from the POV of a cat on the run from cat catchers, and the scene had them trapped in a ...shed?... and the cat catchers burst in and captured one.

The point of the exercise was to practice our genre telling.  We had to rewrite the scene in a different genre and in our own style.  Out of the whole scene read, one part gripped me, and that was the magpie that flew in, crying it's warning to lock the door before flying to rafters above.  With this in mind, this was what I churned out: 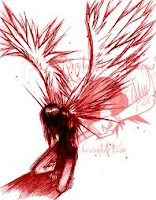 The other angels gathered in the abandoned church whilst one stood on guard outside.  The night was long and dark, and the clear skies had allowed the frost to settle on the ground and forgotten gravestones earlier than usual.  The stars sparkled above them.  There was no moon.

He remained silent, a skill angels were created with, and his black, pupiless eyes roamed the shadows.  He felt uneasy, fearful, but knew this meeting was inevitable.  The three angels meeting inside were discussing their rebellious fall from the heavens and were planning their next move.  There were more like them out there.  At the time of the riots, twenty or so angels had escaped and swept down to the lands below in a bid for freedom after centuries of being cooped up.  Every one of these had gone their own ways, treading their own paths - and all aware of the Black Angel that had been assigned to follow and deal their punishment.

This was what he was on the look out for.  He trusted that what ever plans his fellow angels would come up with would be wise and would take them to safety but he had to ensure that their choice had its chance to be made.


His black eyes studied the darkness of the surrounding churchyard.  A light breeze drifted across the back of his neck.  He turned.  The shadows loomed, their thick masses sneering at him, and he gave an uneasy shudder, ruffling the feathers of his wings.

Nothing moved.  There was only silence.


He turned back, not liking the niggling feeling that ate away at him.  Something was wrong.  By the time he saw the large, black wings swooping down towards him, he knew it was too late to retaliate.  The size of them tripled his own, and there was no chance of defeating such a ferocious being.  Thrashing around, he swung through the opening of the church.

"Lock the door!" he yelled.

Startled faces peered back at them.  He repeated his command as he opened his wings and lifted himself up to the rafters but there was no time to follow them through.  Instead the other angels scarpered, desperately seeking for a hiding place.  He saw from above as two disappeared in the shadows for protection, but it was too late for the third as the menacing form of the Black Angel stormed through the opening and pinned him to the ground, his large black wings enveloping him and his talons piercing through flesh...
Posted by DRC at 06:58