An Idea If You're Struggling To Name Your Characters . . .

Peggy Eddleman over at Will Write For Cookies (love that title) wrote an interesting post the other day about names and choosing the right name for your character. There were some good comments too.

The mind works differently for everyone. For some, names come easily, names that fit their character perfectly, but for others it isn't as easy. Characters may start off with a name but by the end may have gone through several different ones because the last just didn't fit.

So how do you find the perfect name for your character?

I fit in the catagory where names come easily to me. I've never changed half way through a WIP. Once I've created a character and given them a name, it's like I've created a living, breathing person. I can't change their name half way through. For me, that's like changing a kid's name when they reach six years old because you feel you prefer another. Once I've named a character, it sticks.

But I don't give my characters any old name. Just like the plot, it takes planning and tweaking. As many of you know, I'm always plotting and planning, and as I write my current WIP, I'm working out and tweaking the next. Along with this comes characterisation. Within this time I explore my character's personality and learn who they are. They grow and evolve, and more often than not they do this before your very eyes without you realising. All of a sudden your characters are real, and when they get to that stage they tell you their name.

But if it doesn't work like that for you, then it's down to you to play parent and choose.

One idea on how to choose is to look at your character's background. Who were the parents? We're they busy business people? Family orientated people? Or maybe even go-with-the-flow-laid-back people? Having a rough idea of the environment where your character grew up can help a huge amount. Someone who is brought up in an environment where society plays a big part, where trends are there to be followed, or someone surrounded by traditionalists will more than likely have been given a popular name.

If there is someone famous who influenced the family household, could they have been named after them? For example, years ago in the British soap, Eastenders, Alfie Moon played by Shane Ritchie, graced our screens. He was a huge hit and after that little Alfies started springing up left, right and centre.

Did your character grow up in an environment like that? Were they named after their mother's dream date? 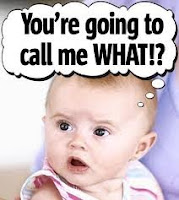 the paths that society expected? The names they choose would be unusual and uncommon; something that matches their surroundings.


However, if you like the uncommon name, it would be wise not to choose something too long or awkward to read. Remember, you have to type this name for an entire novel, and if a reader is faced with a name that can't be pronounced, it can be off-putting.

You don't need to go overboard when working out your character's history. You only need to touch the surface. And by doing this, you also get to learn a lot more about the person you intend to write about; you get to see what drives them, where their passions came from, their fears and their hatred. It gives them reason and this gives them depth and makes them feel more real to the reader.
Posted by DRC at 06:03